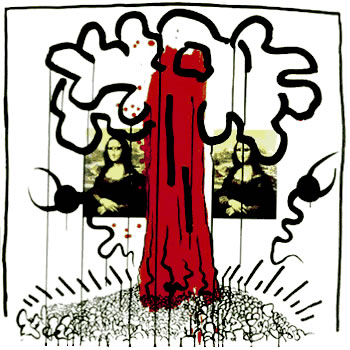 Introduction
Mariners sailing close to the shores of Tuscany heard a voice cry out from the hills, the trees and the sky: “The Great God Pan is dead!” Pan, God of Panic: the sudden awareness that everything is alive and significant. The date was December 25, 1 A.D. But Pan lives on in the realm of the imagination, in writing and painting and music. Look at Van Gogh’s sunflowers, writhing with portentous life; listen to the Pipes of Pan in Joujouka. Now Pan is neutralized framed in museums, entombed in books, relegated to folklore. But art is spilling out of its frames into subway graffiti. Will it stop there? Consider an apocalyptic statement: “Nothing is true. Everything is permitted.” – – Hassan i Sabbah. Not to be interpreted as an invitation to all manner of restrained and destructive behavior; that would be a minor episode, which would run its course. Everything is permitted because nothing is true. It is all make-believe, illusion, dream…ART. When art leaves the frame and the written word leaves the page – – not merely the physical frame and page, but the frames and pages of assigned categories – – a basic disruption of reality itself occurs: the literal realization of art. This is a very different direction from Duchamp, Klein and Manzoni, of appropriating everything in sight by signing it or putting it on a pedestal. Instead of appropriating by framing and signing, remove the frames and the pedestals, yes, even the signatures. Every dedicated artist attempts the impossible, Success will write APOCALYPSE across the sky. The artist aims for a miracle. The painter wills his picture to move off the canvas with a separate life, movement outside of the picture, and one rent in the fabric is all it takes for pandemonium to sluice through.

Page 1
Last act, the End, this is where we all came in. The final Apocalypse is when every man sees what he sees, feels what he feels, and hears what he hears. The creatures of all your dreams and nightmares are right here, right now, solid as they ever were or ever will be, electric vitality of careening subways faster faster faster stations flash by in a blur.
Pan God of Panic, whips screaming crowds, as millions of faces look up at the torn sky:
OFF THE TRACK! OFF THE TRACK!