This biography uses Keith’s own words to tell his story–words that first appeared in numerous interviews and profiles published during his lifetime, as well as in his personal diaries.

Keith was born to Joan and Allen Haring on May 4, 1958. He grew up in Kutztown, Pennsylvania, the oldest of four siblings. His artistic leanings were evident from a very early age.

“…My father made cartoons. Since I was little, I had been doing cartoons, creating characters and stories. In my mind, though, there was a separation between cartooning and being an ‘artist’…”[1. David Sheff, “Keith Haring: An Intimate Conversation,” Rolling Stone, August 10, 1989, p. 61.] Art continued to be a central interest throughout Keith’s experimental and rather rebellious adolescence. Through books and museum visits (Keith saw his first Warhols on a church visit to the Hirshhorn in Washington, D.C.) he began to develop an awareness of modern art. After high school, Keith enrolled in the Ivy School of Professional Art in Pittsburgh. 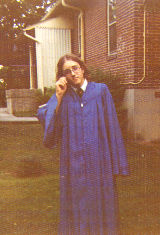 “I’d been convinced to go [to art school] by my parents and guidance counselor. They said that if I was going to seriously pursue being an artist, I should have some commercial-art background. I went to a commercial-art school, where I quickly realized that I didn’t want to be an illustrator or a graphic designer. The people I met who were doing it seemed really unhappy; they said that they were only doing it for a job while they did their own art on the side, but in reality that was never the case–their own art was lost. I quit the school.”[2. Sheff, p. 61]

In 1976, Keith hitchhiked cross-country, stopping along the way to look at other art programs. When he returned to Pittsburgh later that year, he sat in on classes at the University of Pittsburgh, and eventually became involved with the Pittsburgh Arts and Crafts Center, where he had his first important show.

Elements that would become central to Keith’s style were beginning to emerge; he began working with a vocabulary of small, interconnected abstract shapes. At the same time, he began to discover some of his most important influences among modern artists.

“…I went to a huge retrospective by Pierre Alechinsky at the Carnegie Museum of Art. It was the first time that I had seen someone who was older and established doing something that was vaguely similar to my little abstract drawings. It gave me this whole new boost of confidence.”[3. Sheff, p. 61]

“…I used the library at Carnegie all the time. I was reading a lot. I was really into Dubuffet at the time… the last works that he did were very similar to the little shaped things I was doing….”

“…And that was the time that I started doing the really big things. I think I was taking the cue from Alechinsky and saying I can do these same things, but I can do them with ink, and I can do them big. I didn’t have to worry about what it was, it was completely spontaneous. But still somehow about the patterns and the shapes…”

“…I saw Christo talk around the same time, and it was right after he had done the Running Fence [1972-1976]. That was another thing that had the most profound effect on me…the event as public art takes it into another arena besides object-making…”[4. Paul Cummings, “Interview: Keith Haring Talks With Paul Cummings,” Drawing, May-June 1989, p. 8.]

“…The thing I responded to most was [Christo’s] belief that art could reach all kinds of people, as opposed to the traditional view, which has art as this elitist thing…”[5. Sheff, p. 61] 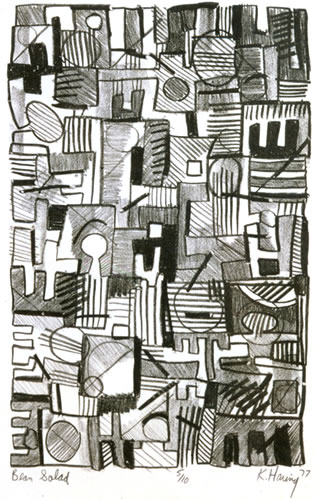 Keith was excited enough about finding his artistic role models and about showing his work in Pittsburgh to start to consider his next steps as an artist.

“…When someone canceled an exhibition [at the Pittsburgh Arts and Crafts Center] and they had an empty space, the director offered me an exhibit in one of the galleries. For Pittsburgh, this was a big thing, especially for me, being nineteen and showing in the best place I could show in Pittsburgh besides the museum. From that time, I knew I wasn’t going to be satisfied with Pittsburgh anymore or the life I was living there. I had started sleeping with men…I decided to make a major break. New York was the only place to go…”[6. Sheff, p. 61-63] 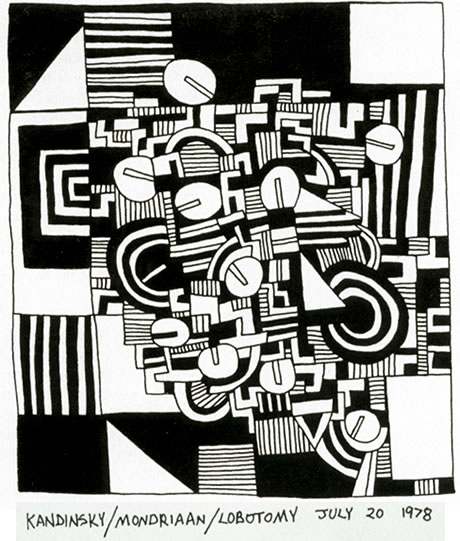