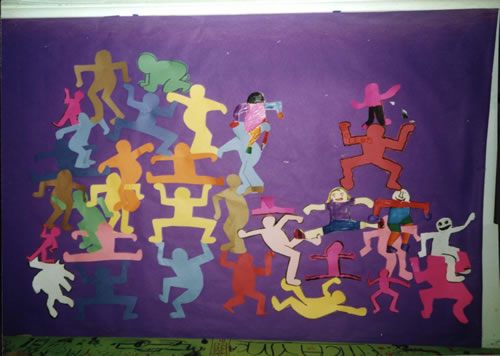 Sent in by the YMCA in Sarasota, FLorida, this lesson explores the use of multiple figures in the medium of collage.

To build an understanding of depicting the human figure in art.

To expose students to the methods and style that Keith Haring used to depict people in his work.
To allow students freedom to explore composition.

I Wish I Did Not Have to Sleep

1815 | I Wish I Did Not Have to Sleep | Hardcover
341A | Drawing The Line - A Portrait of Keith Haring Video
142a | Whitney Exhibition Catalog | Paperback
554a | Keith Haring, Authorized Biography | Paperback

My enthusiasm began with the Keith Haring video "Drawing the Line." Since I had been to college in the late 60's I had never heard of any of these artists while in art school, and the video gave me much needed background information for this artist who decorated subway stations with his simplified icon-like drawings that feature his trademark "radiant baby" and "barking dog." I also saw a wonderful Keith Haring exhibit at the Whitney Museum in New York City. That exhibit prompted me to read a biography of Keith Haring and also his diaries.

At the Whitney Museum I had purchased a book about Keith Haring that was written for children. It is entitled "I Wish I Didnt Have to Sleep." Full-page illustrations of his paintings accompany various interpretations by children of each one. Keith Haring wanted his artwork to be easily understood, but he didn't want to interpret any work a certain way. He hoped his paintings would be understood at different levels, by all ages. At the Kindergarten level I had templates of people that I drew from Keith Haring designs that they could draw around and color and cut out. We took all the cutout people and made a pile of people like Keith Haring often did in both drawings and sculpture. The older children tried drawing people à la Haring in some different poses and either cut them out to add to the "people pile" or did a whole sheet of them in marker for a design. Some kids got really into it and made up their own scenes. Since Haring also painted on tarps, a small group of fifth graders made a tarp banner with acrylic paint. It had Keith Haring-like figures moving across it.

What happens to the figures when a pile of them is created? Does the meaning change?

To challenge students, ask them to limit their pallette to only 3 colors.

This project was first published in School Arts Magazine. 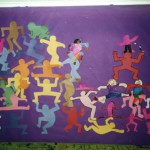 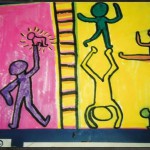 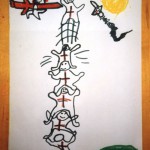 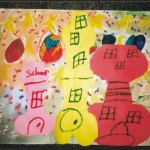 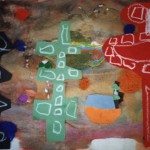 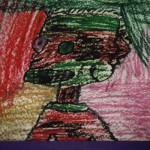 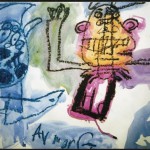