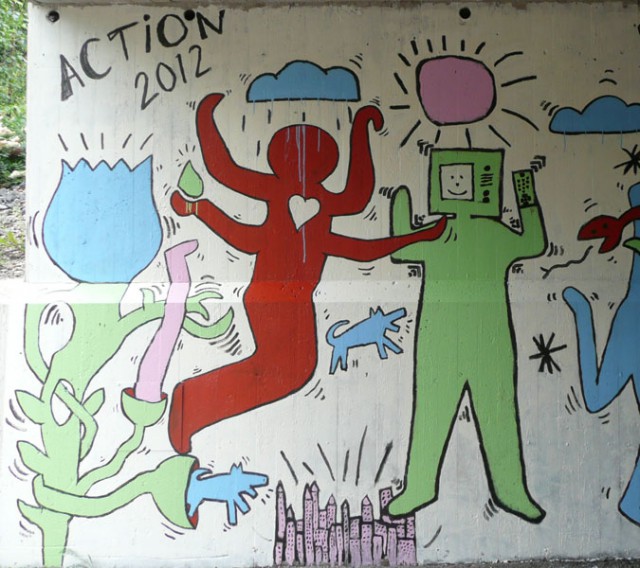 "Action Painting" day camp participants (kids between 11-14 yrs) painted a Haring inspired mural on the wall of the village's railway station underpass, transforming an ugly gray concrete wall into a colourful piece of energetic art. The 3-day day camp ran for 5 hours per day, with 4 dedicated to art.

To study the works of Keith Haring.

To learn about expressing movement in art and about transforming silhouette style portraits into something completely new by letting your imagination run free.

To learn about using stencils and paint rollers in art.

To provide kids with an opportunity of making truly large scale art.

To show how imaginative and well done piece of art can transform public space from boring and quickly passed by into something making people stop and admire. Furthermore, with the project including painting over graffiti already existing on the well, it provided an excellent opportunity to discuss the differences between well done street art and mere haphazard scribbles on a public wall.

To have children thinking about the importance of art in public spaces in general.

As a way of introduction, the participating kids were told about Keith Haring and shown artwork by him, including large scale murals. We discussed Haring's use of colour and outlines; his use of simplified human, animal and inanimate object form; how he expressed movement making "still images" vibrant; his use of overlapping figures in his art; and how he made things (people, animals, inanimate objects) transform into imaginative forms. Next, we discussed shortly the concept of using stencils in painting a large scale mural. In our case, this meant having designs to work with before heading outdoors to actually paint. Finally, we talked about how we could take all this as an inspiration for our mural.

Armed with a roll of construction paper and pencils, we set to the work of getting each of our participants - including the two teachers - transformed into imaginative figures on our mural. With the teachers showing how, one participant laid down on the paper in creative postures with another tracing the body with pencil. Next, the resulting body trace with sufficient extra paper was cut off and the next participant laid down.

With everybody having their body traced with pencil, we set to work with "making the body trace into Haring art" with markers: lines were simplified, heads fuzed into bodies. After this, the question went: "What could you do to make the body traces more imaginative?" and the traces started to transform into quite wondrous more-than-human shapes. In addition to participant based shapes, a few animals were added into the bunch of stencils.

When the shapes were considered done, they were cut out, rolled, packed and transported to the railroad underpass site.

On site, we arranged our stencils on the wall, discussing good composition and how to overlap images in a good way, and taped the stencils in place. Next, we traced the stencils using black paint. After this, the stencils were taken down and the outlines completed.

Day 2 began with choosing colours for each of our figures, human and animal. We had 1980's style of colours for the figures (pink, dark lime, light blue, red) and decided not to place to figures of the same colour next to each others.

Ground colour was set to be neutral and the latter half of day two was spent painting the backgroud. This was to need several layers, due to the underlying graffiti.

The day began with the final layer of ground colour. After this was painted in, the site was left to dry for a couple of hours, while the group went elsewhere for a bout of non-Haring action art.

All in all, this was a great project. Local newspaper got interested by day 2, passers by told their friends to come over and see the great peace of art in progress while we were still painting, so the kids got a feeling of having participated in something quite important for the local community. 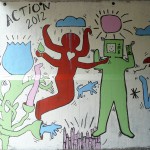 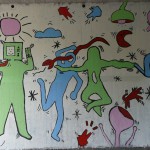 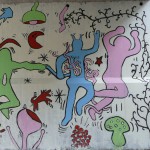