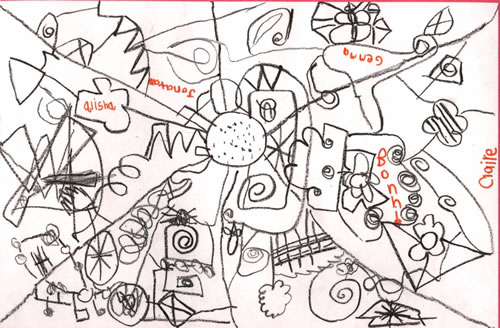 With an emphasis on line, this lesson explores the potential of a collaborative process by conitnually redefining the drawing as a piece of work as well as a process.

To explore the concept of "morphing" an image. Keith used to make collaborative pictures with groups of children in a similar way.

To emphasize collaboration and cooperation.

To promote free expression, thinking outside the box, and creative thought.

Tell the class about the way Keith Haring would work with groups of children and make art with them. Sometimes he would have the children gather around a piece of paper or mural paper, and he would pass a drawing tool (crayon, marker, etc) around the circle of children. When a child has the drawing tool, it is his/her turn to draw. The picture is constantly changing as each child adds his/her own creative flare to it, constantly reinventing, or "morphing" the image. It is fun for the others to watch while they are waiting for their turn.

Since my students often work in small groups, I had each group make a morph. I started the morph by placing a shape or design in the middle of the paper. We had already talked about how Keith used a lot of bold outline in his art, and that the "line" is so important in his work. We decided to use only a black crayon. I explained that when it was someone's turn he/she should just let the hand draw what it wants, trying not to "think" too much about it. For example, I would say, "We are making designs. Let's let the crayon go where it wants, making the shapes and lines it wants to make. Let's not try to draw anything specific like a house or cat, etc." The only rule we had was that your addition to the picture had to be "attached" to the others' designs. So, when you started to draw, your crayon would need to be touching the design somewhere and then off it could go! You could do whatever you wanted as long as you used "line".

The students had a great time watching as others took their turns, and they were surprisingly patient. Your turn is over when you decide it is. Discuss how others are waiting though, and it wouldnt be fair to take too long with your turn, since it is a group project. I promoted commentary while the students took their turns, by asking "What do you see in this morph? Each person might see something different and that's OK." While they commented on the things they could "see" in the morph, I was writing down everything they said. When the morph was finished, I read to them all the comments they said. They said things such as: "A staircase inside a pizza, an eyeball, a horse, a guy who is trapped, a duck that's catching somethingetc." It was fantastic! I then typed up all their comments and posted them beside the morphs on our hallway display. The final task was to name the morphs. Each child got to contribute a word. Another idea would be to vote on a name for the morph. One morph was named "Swirly Space Alien Pizza Town."

Finally, each child got to sign their name somewhere on the morph. 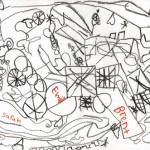 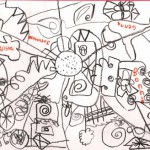 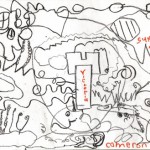 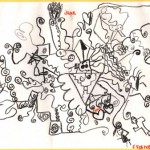